Thanks to this cocktail blog, our history with good and bad holiday drinks is well-chronicled. I won’t return to Tom and Jerrys—ever—and the French 75—though it remains my favorite champagne drink. The time has come to move on, say goodbye to 2016, thankfully, and try something new.

As I mentioned last time, a Google search for “Unconventional Holiday Cocktails” turns up choices like Peppermint Martini, Spiced Coconut Hot White Chocolate, and other drinks rejected for being too sweet, too thick, too complicated, too unnatural, and/or too Seussian. Mostly they were too frou-frou. Though I’m not Fezziwig or the most uproarious holiday party guest, I’m no Scrooge. I try to keep my bah-humbugs to a minimum and keep the season well, but, sometimes, when I look at a Yummly page quilted with coupes of technicolor libations on elaborate tablescapes created for this time of year, I cry a little inside. Does it have to be such a big deal, really?

Plus, while I’m showing off my decision tree, let me confess that I try to consider friendly fire in choosing cocktails—the people around my brother and me, mostly our wives, who will have to share these drinks with us. During this season or any other, I’ve learned to reject the purely alcoholic combinations and know that the most welcome ingredients may be juice and some prominent liqueur we already have. That’s why I thought of Spiked Pear Cider. Its central ingredient is juice, not alcohol—it’s not at all boozy—and it’s both warm and a little fizzy.

The preparation may seem a little complicated, but it isn’t. Just bring 3 cups of the sparkling cider, the spices, vanilla bean (I used a few drops of extract), and the 3 cups of pear juice (I recommend Jumex in a can. Bring that to a boil, turn down the heat, and simmer it for 7 minutes. Stir in the brandy and orange liqueur after that. The recipe says to strain the liquid into a pitcher, but we skipped that part. We also halved the recipe. Top it with more sparkling pear cider and garnish.

Though we’re currently suffering a polar vortex here in Chicago, this winter has otherwise been warm, and I don’t think the hot part of this cocktail is all that essential. In fact, I could see returning to this recipe in June, maybe with a little iced tea added. My inner Thoreau wants to urge simplicity, simplicity, simplicity and doing what seems easiest and most comfortable during this harried time. Just enjoy yourself and each other, no extra assembly required.

Oh those hazy, crazy, lazy days of late Autumn. First, we had the drink as a punch on Thanksgiving Day and now it will soon be Christmas and I am just writing the review. Hazy memory. I wish I could blame that on important things going on but it is really just a jumble of work, events, then some utility construction that has destroyed swaths of our yard and sent me to customer service purgatory on numerous occasions. The next time I call Time Warner will be the official edge of crazy. Finally, the picture that is included is my best illustration of lazy. As in, hey-dummy-you-forgot-to-take-a-picture-of-the-drink lazy.

This is the type of proposal that I love. David came up with a cocktail that could be made in advance (mostly), added a wonderful fragrance to the kitchen and served a group. It was the perfect accompaniment to Thanksgiving so that is how it was served.

There were a few small changes that I made to the recipe. The most important was that I served it cold. That allowed us to make the base, with another slight change by using bourbon soaked vanilla bean pods, in advance and then top with chilled sparkling cider with each serving. The final change was that I used an apple/pear brandy that I had left from a Calvados drink we made earlier.

This punch is a mix of subtleties. The base has a background taste that just hints at the vanilla and cloves. In the same way, the pear and apple meld with neither being dominant. And unlike the many cocktails we have enjoyed with bubbly, the effervescence of the sparkling cider is muted by adding most of it during the mulling process. It could be my predilection for champagne drinks but I think it would be worth trying this with all the sparkling cider added to the base and then substituting sparkling wine for the topper. Especially if you drink this cold.

Jonathan’s Take: This is a Fall drink – subtle, quiet and simple like a day of drifting leaves.

David’s Take: If we do ever have a holiday party, I’ll serve this.

Next Time (Proposed by Jonathan):

We’ve gone so long between entries that another holiday is upon us. It is that time when we enjoy more confections, and food in general, than we do throughout the rest of the year. It is also the time for odd foods such as fruitcake which is rendered edible only through a thorough soaking in booze. We’re going to take a slight break from cocktails and try some foods that are enhanced or dominated by spirits. That can include candies, sides and main dishes as long as there is a liquor component.

The romantic films of the late fifties and early sixties taught me champagne goes to your head more quickly than other types of alcohol. Count on it, once the cork pops Doris Day spills affection she means to keep bottled. Inhibitions vanish with an understanding only possible between the ungirdled. Then unlikely love blossoms, naturally.

Sorry if you continue to attribute special powers to champagne, but, chemically, alcohol is alcohol, and the inebriating potential assigned to champagne’s fizz is, sadly, dubious and perhaps imaginary.

Not that imagination is to be trifled with—science doesn’t support the existence of aphrodisiacs either, but people still invest in the idea.

However, in any case, Valentine’s Day seems like a great excuse to break out the bubbly and indulge imagination. Let’s be honest: husbands often approach this holiday with a special dread. Stakes are high, and my own record of making the day memorable is spotty. I like to think my wife and I have plenty of ungirdled love and understanding—champagne or not—but I’m all for celebrating with the good stuff if it gives me a way to express affection and supplies my wife with an answer when coworkers ask, “So, what did your lousy, good-for-nothing insensitive slob of a husband do for Valentine’s Day?”

They won’t exactly put it that way, of course, but that’s the gist.

As a category, champagne cocktails often aspire to beauty as well as flavor. The first, THE champagne cocktail that appeared (where else) in “Professor” Jerry Thomas’ 1862 book Bon Vivant’s Companion, combines champagne with cognac, angostura bitters and a sugar cube that produces lively bubbles when you drop it in the glass. Visit Martha Stewart’s site and you’ll find many other versions, each with a pleasing garnish and secondary ingredient that makes a celebrant say, “Now, what is that I’m tasting?”

This version, which has a great deal in common with the French 75, substitutes bourbon for that drink’s cognac and omits the simple syrup and lemon juice in favor of a vanilla syrup. Making syrups has become a sort of sub-hobby for me, and, though we’re running out of vessels to contain them all, I’m looking forward to adding this syrup to other drinks.

To Make the Drink:

As usual, I’ll save my response to this cocktail for the end of this post, but I’ll give this much away—an aspiring husband on Valentine’s Day could do worse than a Vanilla Bourbon Champagne Cocktail and a heart-shaped box of sushi. 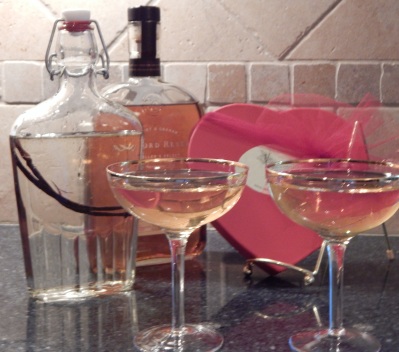 There are cat people and dog people, morning people and night people, those who prefer chocolate to vanilla and versa vice. I would say I am firmly in the dog, night and chocolate categories. Of course there are exceptions. I’ve met a lot of cats that are great, morning is not so bad if I am going fishing or playing golf, and I think I understand the subtlety of vanilla better as I grow older.

This cocktail is an odd mix of bubbly, bourbon and the subtle vanilla. It seems like any liquor that is wood aged is described as having “vanilla notes” even if that is a difficult taste to discern. The bourbon that is called for in the recipe, Woodford Reserve, is no exception so it is hard to tell if it is the super simple syrup with its added vanilla bean or the spirit. That taste is there though, and it is that subtlety that distinguishes the drink. Bourbon and champagne are an odd mix but something, maybe that vanilla, ties them together.

The other thing to note about this drink is the combination of champagne with a liquor. I have always felt, with no scientific proof whatsoever, that the physiological effect of champagne is noticed more quickly than other alcohols. It makes no sense, alcohol is alcohol after all, but it seems to hold true and, when combined with a higher proof spirit like bourbon, seems to be even more pronounced. Maybe I can get some foundation to help me study that further.

The last thing to note is that David proposed this as a Valentine cocktail. I do appreciate the fact that my wife puts up with this blog and am grateful that David’s suggestion notes our wives’ role in this endeavor. It seems like it should be all fun, but keeping up with it each and every week, the sometimes odd ingredients, and the strained shelves of our liquor cabinet is not all roses.

Jonathan’s take: The cocktails with effervescent spirits are almost always good. This one proves that rule.

David’s Take: I wish I had an excuse to drink this cocktail more often.

Next week (Proposed By Jonathan):

We have tried a drink called the Caipirinha de Uva, but I am proposing the traditional caipirinha. It is a very simple mix of cachaca, sugar and lime and is the national drink of Brazil. If David doesn’t have any more cachaca, a sugar cane rum, he is welcome to substitute a similar cocktail called Ti’ Punch made with Rhum Agricole (another sugarcane rum), sugar and lime.