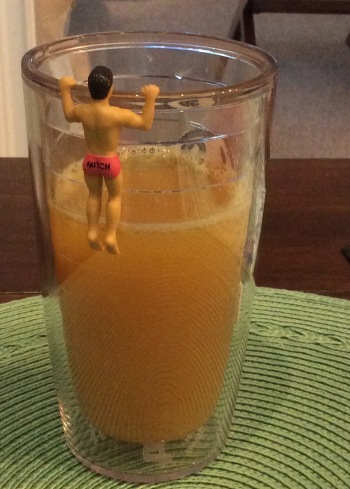 Reviewed By: Jonathan and David

The cocktail proposal was supplied by our guest proposer Bourbon Jerry. More on him later but here is his recipe ( complete with his commentary) for the Old Fashioned Slush:

** The amount you use depends on how strong you want your drink to be. I usually use 2 cups of bourbon whiskey and that should not be too strong for those sensitive to such things. Your drink will be as good as the bourbon you use, so use a good-quality bourbon, but don’t go crazy—Pappy rides alone.

In a large, freezer-safe container, mix together the tea, sugar, orange juice concentrate, lemonade concentrate, water, and whiskey. Place in freezer and freeze at least 6 hours. NOTE: The bourbon will keep the mixture from freezing solid.

When the bourbon mixture is frozen, you are all set!

When ready to serve, remove frozen mixture from the freezer and let stand for approximately 5 minutes.

To serve, scoop (an ice cream scoop works great) bourbon slush to fill a glass approximately 3/4 full. Top with lemon-lime beverage of your choice. Don’t stir, but let beverage mingle with the frozen tea before drinking.

Jonathan: My neighbor typically asks what the next drink will be, with every intent to be there to try it, and he was surprised we had a guest proposal. In fact his exact words were “how can there be a guest proposer on a brother blog?” I think I can explain that by describing Jerry and this Bourbon Jerry character that appears occasionally.

I met the Jerry that preexisted the bourbon version in 1979. He was my suite mate in college. My parents had unloaded me and my stuff and skedaddled for their calm empty nest. I was still orienting when Jerry, his family and his girlfriend’s family started moving him in. That girlfriend is now his wife of over 30 years and is also a Marshall by birth. Since we have assumed we are cousins, with absolutely no genealogical research, that makes Jerry my and David’s cousin-in-law. But there is more.

David met Jerry not too long after I did. A few years later David had moved to New York for grad school and thought nothing of inviting me, Jerry, our assumed cousin and another friend to visit for spring break. That trip included a few adventures with an odd plastic parachutist, visits to some off the path New York locations and some inventive housing that allowed all of us to. Ram into two tiny dorm rooms. David could easily call Jerry a cousin/friend too before it was all over. My memory isn’t much but I am pretty sure that trip was when David introduced Jerry to McSorley’s Old Ale House and another life-long acquaintance began.

Jerry has remained a steadfast friend since but in recent years has assumed the mantle of Bourbon Jerry. While the standard Jerry is calm, logical and even keeled, he is always up for an adventure small or large. Jerry can be counted on to travel on his own or to grab other friends and join any celebration.

A few years back that was a simple college football tailgate. Jerry joined up with another couple and came to Chapel Hill. Somewhere along the way he and the other fellow put a healthy dent in a bottle of whiskey (the third member of their group was a very responsible chaperone), enjoyed some more at the alumni center and then joined our group. I have to admit that despite their Inability to stop giggling like small children it was hard to tell how much they had imbibed. Gradually though, the spirit took over and a whole other Jerry appeared. From that point on, Bourbon Jerry has assumed his role as an alter ego making appearances here and there including at least one in Chicago I suspect.

The true Jerry is a gentleman and scholar. He has taken to the Bourbon Jerry role with a passion and study that includes research, group taste testing and seeking out hard-to-find bourbons. If it were legal, I am sure he would be mixing his own mash, distilling and aging

So what about this slush he proposed? The recipe shows it is intended for a group. In Jerry’s case it has become a go to holiday gift for friends. We tried it with a group at the beach and it hit all the right marks. It is very adaptable since you can adjust the liquor, make it sweeter or more bourbon-y by adjusting the amount of Sprite and as frozen as you choose. It turned out to be best described as the one bourbon drink that non whiskey drinkers liked. One good suggestion was to pour the mix into gallon ziplocs to make it easier to divide, freeze, unfreeze and enjoy.

David: Were Jerry a character in a Dickens novel, he would be a “hail fellow well met,” full of good cheer at every greeting, the friend you’d forgotten was so winning, so affable and warm. Jerry made it to Chicago a couple of years ago, and Jerry and Jean and Beth and I had a wonderful dinner complete with excellent cocktails.

Jerry, I remember, asked to substitute bourbon in his.

Jerry arrived with a photograph I’d forgotten from that trip to NYC, and a bunch of questions about the past, present, and future. Even though we did a lot of catching up, in many ways it was as if we’d never lost touch. That is the secret of Bourbon Jerry, I suppose—time seems immaterial, a mere nothing despite its steady passing.

Because we really have no friends, we halved his recipe and still had some left for about three weeks. I tried it every which way… with ginger ale and sprite and tonic. I liked the tonic best, as the drink is mighty sweet (almost like the orange concentrate it includes). Our frozen concoction really wasn’t that strong, however, and my most successful additive was to take the frozen mixture and… add more bourbon. This cocktail is quite reminiscent of an old-fashioned, and I figured Don Draper (and Bourbon Jerry) would approve.

And this drink opened my eyes to a whole new school of slushy possibilities someone might keep on store for reconstitution. I have experimenting to do.

Jonathan’s Take: everyone needs a cousin-in-law like Bourbon Jerry.

Next Time (Proposed By Jonathan):

We have used a number of lists of classic drinks to help with ideas. The latest one that I read was simply 10 drinks and the only one we have not tried is the Sidecar. I’m ready to go back to a classic and certainly have the cognac to use.

As far as I’m concerned, the southern intonation of “sweet tea” can’t be rendered phonetically in prose, as it contains bent notes divergent from most American English. Though sweet tea as a concept entered my consciousness long ago, my clearest memory of hearing the term was during college at Wake Forest, late one semester when I was flush with unspent meal credit. That was the only time I’d think of visiting the Magnolia Room, the most upscale of all the dining options, complete with white tablecloths, baskets of rolls before dinner, and student servers. I remember scheming to make our server, a friendly classmate from Charlotte, use the words “sweet tea” over and over just to hear them spoken properly.

I like to hear Jonathan’s wife Debbie say the words as well—she knows, as a true North Carolinian, how they ought to be delivered. Maybe sweet tea isn’t exclusively a North Carolina thing, but it receives proper reverence there, and rightly so. It’s can’t be good for you, but, if you have a sweet tooth as I do, it’s a treat.

All of which is prefatory to saying this week’s cocktail, Libertea, feels like a variety of sweet tea to me… only alcoholic. I found the recipe online and thought it’d be appropriate for July 4th celebrations. Despite the name, I seriously doubt Thomas Jefferson, George Washington, or Patrick Henry invented this cocktail. It must have originated with the folks who make Wild Turkey, as it involves both the bourbon and a cordial called American Honey made by the same company. Add lemonade and black tea to the liquor, and you have an Arnold Palmer—who also went to Wake Forest, by the way—only with a kick.

The recipes, in fact, demand you make the stuff in quantity. I couldn’t find any versions that whittled the contents down to a single serving. So, like Jonathan, I split it between a mint and basil version. While it looks intimidating to pour in alcohol measured in fractions of a cup, the potent part of the recipe is proportionally small—which is to say, you can drink a lot before you realize it’s creeping up on you… sort of the way your weight creeps up on you if you subsist on sweet tea. I’ll leave the full review to Jonathan but will offer at least this warning—yes, the bourbon is in there, wait.

And I’ll tell you the recipe, of course: 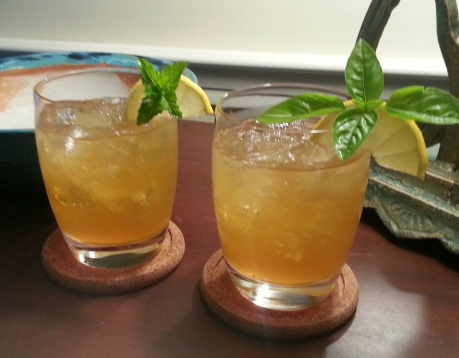 David has felt that he has been on the schneid in his cocktail choices. A quick review of the last couple of months shows that it is not true, although I might suggest that he avoid suggesting oddly colored drinks. I also don’t believe that tasty or even enjoyable mixes were ever part of our mission. It makes perfect sense that we would hope to suggest and try something we could enjoy, but our mission was to explore”… exotic, classic and forgotten mixed drinks.” Whether he was on the schneid or not doesn’t matter this week, as this is one of the best cocktails that we have tried.

The recipe has a lot of steps like many of the ones we have sampled recently. This one began, as I am sure David has described, by making tea, adding lemonade and infusing with basil. We both decided, following David’s suggestion in his introduction, to try infusing half with basil and half with mint. I gave up on the idea of working out proportions and decided instead to make the full batch (split for the infusions) since there are usually others who want to taste the week’s creation and it probably keeps pretty well. Plus there is always the hope that our follower, Jerry, might show up in town with cup in hand.

The highlight of the Libertea is the perfect amount of enough sweetness to the drink. Between the lemonade and the American Honey, the sweet combines perfectly with the bourbon, basil (or mint), and black tea spices. I am inclined towards iced tea as a beverage anyway, and often mix it half sweet and half unsweet, so this is the alcoholic version of that. Add the lemonade and I have to wonder why someone hasn’t worked out how to make this a bar staple. Since we tried two versions, it should be noted that the basil version, to me, was the better of the two.

Next week (proposed by Jonathan):

I wanted to go back to rum as the base. There are quite a few exotic and tropical alternatives, but I decided to go with another classic of the tropical set – the Mai Tai. Some recipes require two mixes, grenadine and orgeat, which need to be made in advance but the version I am leaning towards skips the grenadine. All recipes require small paper parasols.