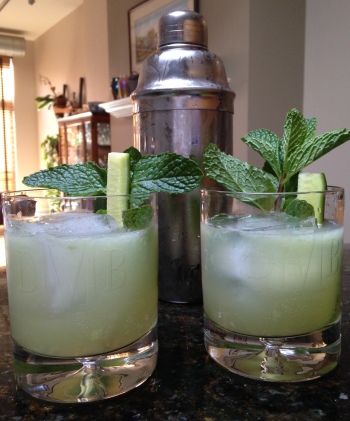 Wish I could say that my delay in writing this post was that this cocktail, which, in my mind, is so close to a julep, is better offered closer to Kentucky Derby Day. Truth is, like a lot of people, I’m busier than I want to be and tired most of the time.

Here, however, is a drink that might pick people up. Having lived in Louisville for a while, I have a special affection for juleps. They remind me of spring itself, those sunny and temperate days that, over the past few months of gray rain and snow, you never quite let yourself believe possible. The new green of this time of year renews hope, and mint conveys that hope beautifully. Something about mint always offers a refreshing element in food and drink.

Two of the non-julep notes of this cocktail—lime and tequila—are borrowed from margaritas and offer festive and zesty flavors too. Here’s the recipe, which comes from Tipsy Texan: Spirits and Cocktails From the Lone Star State.

In the botton of a mixing glass, muddle the cucumber and mint syrup. Add the tequila and lime juice and shake vigorously with ice to chill. Strain into an Old Fashioned glass filled with ice. Garnish with fresh mint and a cucumber spear. You can also float some mezcal on top, if you have it. Lamentably, I did not.

Cucumber seems a popular ingredient in food and drink recently. Though there’s nearly nothing to it in terms of calories and some people might think of it adding nothing but cellulose, it enhances the other fresh, botanical dimensions of this drink. As the description in Tipsy Texan suggests, this cocktail is suited to a warm day and touts, “You’d be hard pressed to find a cocktail more refreshing than this combination of tequila, mint, and cucumber.” 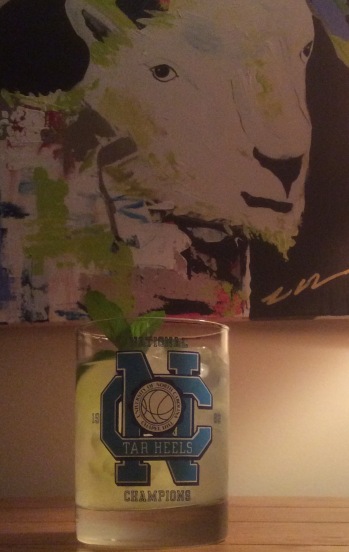 There is a general rule that I follow when gathering the ingredients for a cocktail. If there is an item that is difficult to find, secondary to all other parts of the drink ,or just missing from the pantry—I will skip that part. It is unusual yet there are examples where I have done that and noted it. I am talking about you Chinese five spice on the rim of the glass.

This proposal calls for muddled cucumber which is fairly unusual although not completely foreign. That said, it is hardly secondary when one considers all of the other parts of this drink, which are somewhat normal in mixology. The problem was, though, that I had everything ready when it came time to make the cocktail except a cucumber. There was just a moment of hesitation before I decided I could not accurately create the El Pepino without first going to get one. Good choice.

This is a drink that is the product of all its parts working together. The mint is subtle, the sugar in the syrup a smoothing agent, the tequila distinctive but not assertive, the lime juice a contrasting yet quiet acid as it should be. The cucumber jumps out. It makes El Pepino different and distinctive to the point that I think even those who are not fans of cukes would agree that without it the mix is fairly run of the mill. I am probably wrong but my guess would be that most bars don’t stock cucumber. That’s a shame because this is a drink I would actually order without hesitation.

Jonathan’s take: I hereby apologize to the cucumber and promise to find some Pimm’s in the back of my liquor cabinet so that the cuke may shine again.

David’s take: I won’t substitute this drink for my usual Derby Day julep, but maybe every other suitable occasion.

Next Time (Proposed by Jonathan):

I do not consider calories when ordering or making a cocktail. As a beer drinker that is probably a defense mechanism. There are those who do, however, and there are recipes with just that in mind.

Once again, the proposal is an idea rather than a specific drink. I am suggesting that we try cocktails with less calories. That does not mean making simple syrup with stevia leaves, although that is a consideration, rather it is to adjust the ingredients to trim the effect on the waist line. There is no calorie limit just a general concept to lower the total from the standard version of a cocktail or to create a new drink for those who are watching what they eat—or drink.

I feels some club soda coming our way.