Paloma, La Paloma, the Dove or as one odd reference suggested Paloma Tequila. This is a cocktail I chose, in part, for its increasing popularity and many variations. It has those. What it needs is a name on which everyone can agree. For our purposes, and for history as you will read, I like La Paloma.

The link in the last blog post proposal takes you to a Feast Magazine write up that includes history for the cocktail and a couple of different recipes. That means readers should know the history, or does it? They write that the cocktail traces back to the town of Tequila in the Jalisco state. The bartender who can claim it was Don Javier Delgado Corona. Quibblers would want say that it is such a basic drink, essentially in the family of the Tom Collins, that there were probably many versions created in many places. Even the name is linked to questions about where it came from with the suggestion that it might be as old as an 1860’s folk song called “La Paloma.”

Mix the first three ingredients, add soda (4-6 ounces) and ice. Garnish with lime, grapefruit or nothing.

Mix everything but the soda, then add that and ice. Garnish away.

There are recipes that say salt the rim of the glass instead of adding it to the drink. If you choose to use grapefruit soda expect lots of recommendations. The sodas list includes Fresca (it’s lighter but don’t do it), Jarritos (you’ll need a Mexican market), Squirt, Izze, or Whole Foods Italian grapefruit soda. Those are just some of the options.

There were lots of tasters so I made versions with blanco tequila, reposado tequila, Fresca (which is why I know not to use it), Squirt and Izze. A half ounce of lime didn’t seem like enough so there was probably more in each cocktail too. I didn’t make the fresh grapefruit version but if I was to make this a regular drink I think the combination of fresh juice and agave syrup could be just right. It would really be the Tom Collins of Jalisco then. 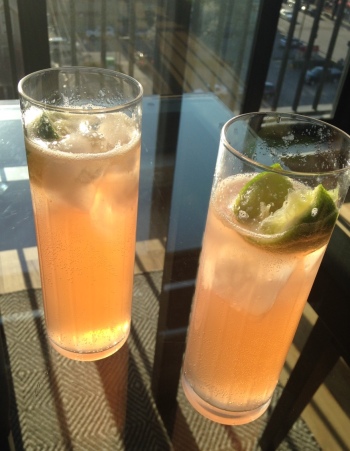 When I mentioned to a friend that Jonathan and I were trying a Paloma for the next blog post, she said, “Isn’t that a sort of Margarita?” Certainly, some connections suggest so—tequila, for one, and also lime and salt. If you like your margaritas exotically flavored—prickly pear, anyone?—the grapefruit isn’t any serious adulteration. Blending grapefruit juice, agave syrup, lime, tequila, and ice with a machine… you might call that a margarita.

Yet, here’s a case where differences matter. I like margaritas, but I like this drink better. For one thing, preparing it does not require electricity. It’s shaken. Plus, though the Paloma has the sweet and sour (and salty) mix of a margarita, it doesn’t start, as many margaritas do, with a frozen mix that renders it an adult Icee. This cocktail did not seem nearly as sweet—grapefruit soda means you can skip the agave syrup—and, more tequila-forward, it presented itself as more than a way to hide spirit. A Paloma isn’t dessert. It feels… sophisticated.

Maybe this drink is the branch of the mixology tree margaritas ought to have followed.

In our experiment, we tried some variations Jonathan didn’t, choosing mezcal as the tequila and even substituting half the mezcal for gin in one version. Everything we tried was satisfying, but the mezcal added the most. Between sweet, sour, the salty, bitter, and smoky the Paloma seemed one of the most complex cocktails we’ve tried. The addition of botanical complexity of gin was perhaps a step too far, but why not test the envelop? The result was interesting, suggesting the range a basic recipe can cover when swaping one element for another.

Recently I wandered into a music review online. I don’t read them generally because they feature so many descriptors I barely understand. One I do understand, though, and one of my favorites, is the prefix “proto,” which I take to mean before what we have now, the more basic past some present relies upon. The Paloma felt like a proto-cocktail to me, a combination evolution can work with.

Jonathan’s take: You want summer? You deserve summer and this drink is it.

David’s Take: One of my favorites, in all its variations.

Next Time (Proposed By David):

Most cities likely have a cocktail column by now, a few paragraphs buried in the home section or weekly magazine. They can’t hide from me, and last week’s Chicago Tribune included an article that intrigued me—“Cocktails With Equal Parts Are Easy, Yet Sophisticated.” For next time, I’m inviting Jonathan to join me in inventing an equal portion cocktail. No specific ingredients, no history we’re beholden to, no famous and magical mixologist—just equal ingredients.