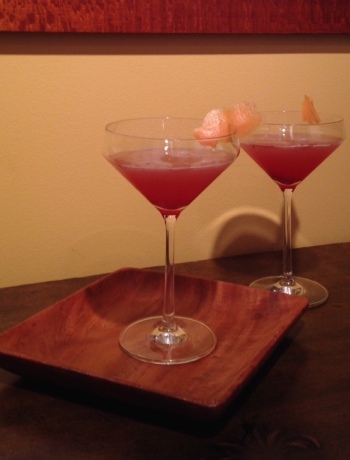 It’s “Spring” break here in Chicago, but the quotation marks refuse to come off—only a few hours last week crested 60 degrees, and, though some trees are thinking about budding, most of the landscape remains gray. Yet, when I get back to work, I’ll no doubt encounter the tanned faces of all those people who escaped the city for Florida or other warm climes.

At least we have grapefruit from those places.

This week’s cocktail, the Blinker, features citrus in a wishful way. On some sites, it’s described as a “winter citrus cocktail,” and that label fits the way Chicagoans consume grapefruits this time of year. Though Americans have become accustomed to getting any fruit we want any time of year, grapefruit remain a popular winter treat here. Organizations still sell boxes or bags of grapefruit to raise money. People occasionally give prodigious amounts of citrus as thank you gifts to distribute among officemates.

The Blinker dates back to times when a winter grapefruit was probably more exotic. Though the exact origins of the drink recede into the fog of history, the recipe emerges in Patrick Gavin Duffy’s The Official Mixer’s Manual, published in 1934, and Ted Haigh (or Dr. Cocktail) renovated it for his Vintage Spirits and Forgotten Cocktails in 2004. The original recipe called for grenadine, but his version uses raspberry syrup or raspberry preserves. Here’s the iteration that appears in my source, The PDT Cocktail Book:

Shake with ice and strain into a chilled coupe.

What makes the Blinker a winter cocktail is the rye, which, besides lending a spicy backdrop to the citrus, makes the drink more robust than gin would. However, you could try this cocktail—as my wife and I did—with gin as well. The result is more botanical than robust (and probably has a different name I didn’t discover) but the gin version highlights the grapefruit nicely. The raspberry certainly adds to both rye and gin, but using gin makes grapefruit the star.

The recipe I used didn’t call for a garnish, but what fun is that? I added a twist of grapefruit peel I’d rubbed on the edge of the coupe. One recipe online said not to use ruby red grapefruits, but we did. The color was gorgeous. Besides, Jonathan and I used to eat a lot of Texas ruby reds. Our older brother achieved almost factory efficiency cutting and dispatching them. The smell of a grapefruit peel still provokes powerful nostalgia for me and makes me long for short-sleeve shirts… or at least no coat heavier than a windbreaker. 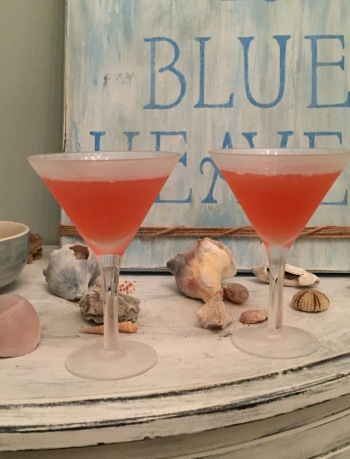 Classics have usually stuck around for good reasons in particular because they taste good. But what about a classic that disappears, gets dusted off and then comes back with a slightly different identity?

David sent me a link for the Blinker which like most references credit Ted Haigh with its resurgence. I have Haigh’s Vintage Spirits and Forgotten Cocktails so I turned to that as a primary source. The part that intrigued me was that it was originally made with grenadine, one of my favorites, yet Haigh changed it up to add raspberry syrup. It is also interesting that the current recipes for this cocktail all use the raspberry but with little consistency in the type specified. Oh the quandary of mixology – what kind of raspberry syrup should I use or dare I break ranks and make it with grenadine?

Well, who am I to question Ted Haigh? I went with raspberry syrup. I made my own simple syrup with fresh raspberries. Once that had simmered a little to thicken, I let it cool, strained it and added a little vanilla vodka (there has been little use for that in my liquor cabinet) to stabilize it.

The final proportions, which I am curious to compare to David’s, were two ounces rye, one ounce fresh grapefruit, and two teaspoons raspberry syrup. The classic did not fail. Rye stands out but the full ounce of grapefruit provided a counterbalance. The raspberry was a little lost except for color and sweetness. I think a thicker and sweeter syrup might have worked better and given the drink more body. This seems to be a drink that is meant to be about the rye, though, and I am good with that.

Jonathan’s take: Still wonder what the grenadine did to get jettisoned.

Next Time (Proposed By Jonathan):

There are so many quality tequilas and mezcals available, which we have written about before, and I keep trying to find cocktails that highlight them. Searching for that brings up a drink that seems to be slowly pushing the Margarita back – the Paloma. My guess is that the resurgent cocktail movement has deemed the Margarita pedestrian while the Paloma is a less known, just as malleable for crafting new versions and well suited to warm weather refreshment. Or maybe I hope all of those things.