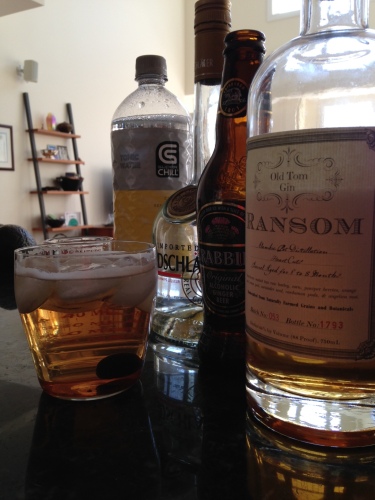 Inventing a cocktail should be the easiest thing ever—just stumble over to the liquor cabinet, pull out a couple of bottles and maybe a mixer, combine them, and gussy up the glass with some garnish. It’s true that it’s simple to select ingredients and, unless you’re looking to match a flavor profile or attempt some exotic preparation, it’s simple to stir, shake, or swirl them together. Getting the drink right, however, means the loving trial and error of choosing complementary spirits, determining their proper proportions, and, of course, coming up with a name not already claimed.

A tough job, though I suppose someone must do it. This week I volunteered.

The G’s in “3GT” stand for three ingredients we encountered elsewhere: Ginger beer (which we used in the Kentucky Mule and the Dark n’ Stormy), Gin (which, Jonathan tells me, is his favorite spirit, one that comes in many distinctive varieties), and Goldschläger (which we used before with champagne, and which is apparently more commonly ingested by crazy people as shots). The T is tonic because, well, everything else in this drink is alcoholic, and you can’t do much experimenting when you’re under the table.

And, since I get to tell my own origin story for this week’s drink, I’ll take the unusual tack of telling the truth: I like all these ingredients and wondered if they might taste good together. Crabbies Ginger Beer has become a favorite libation for me, nicely spicy and sweetish. Ransom’s Old Tom Gin, the variety I chose for this drink, lends a mellow and botanical tang. Goldschläger is really strange stuff to be sure, but the cinnamon taste adds a different sort of heat (and I have a whole bottle to use up). Tonic is the bitter element to keep the whole thing from being too sweet.

Yet the origin story isn’t over. Though I’m revealing this drink today, alas, additional research may be necessary to perfect it. It still may be too sweet and still may need more bitterness. I’ve experimented with including another half-ounce of a friend’s homemade Amer Picon (before I—tearfully—used it up) or Punt e Mes, a particularly bitter red vermouth. Both, I think, enhanced the drink, but I didn’t want to burden Jonathan with another hard (or impossible) quest.

So here is the recipe I devised (with the other variation in parentheses):

Fill an 8-10 oz. glass half way with ice, add the first three (or four) ingredients and a cherry. Pour tonic to fill the glass. Stir gently and serve.

Naturally, I’m apprehensive about Jonathan’s reaction but have decided to accept his comments as part of the next stage of the creative process. Maybe, Dear Reader, you can help too. 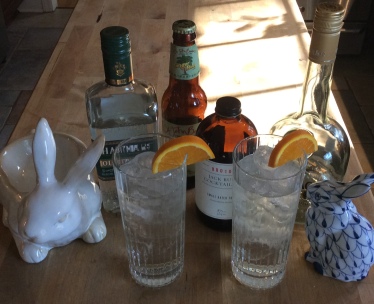 The proposal for this drink had me wondering if I am too critical. My first thought was that I had been hard on David’s other original drink, The Pear Culture, but I loved that drink and wrote so. Then I thought there was some disparity between my reviews of drinks that I proposed and those for which David was the proposer. It wasn’t a complete reading of all blog entries, but it appears I have been fairly equal in my likes and dislikes. That leaves me with one last idea – David was setting me up for a drink he had invented, tried, and didn’t like. That can’t be it either as this drink could make the cocktail list at any bar.

Last week was a great example of the difference in my taste and David’s tastes. Our list of beer by preference wasn’t completely inverse, but it was close. And it goes further than that. David is mostly vegetarian, and I am full on carnivore. Where he might prefer fruit and vegetables, I am likely to go towards a cheeseburger and sweet potato fries, the latter my nod to some semblance of nutrition. I do not eat that poorly, but if it wasn’t for the heartburn that increases with age, I could find a way to eat some form of nachos almost any night. In sum, it seems we should have conversely different tastes in cocktails too, but for the most part have agreed on the good, bad and in between.

This cocktail’s best quality is that it is can change with variations in each base ingredient and still be excellent. Here are some of the examples: I used Jack Rudy’s mix to make my tonic but it was apparent that strong to weak tonics would work; David suggested an Old Tom gin, which I used, although a second version with a more juniper forward gin made a less sweet version; and, the ginger beer I chose was non-alcoholic (mostly because it looked more interesting than the alcoholic version available) and that ingredient alone could completely change the profile of the drink so there could be endless versions. I kept the Goldschlager the same in each drink because the cinnamon was a great counterpoint to the herbs and ginger. I wouldn’t change that, but won’t be surprised if David did to great success.

Jonathan’s take: Seriously, this could and should be on cocktail lists far and wide.

David’s take: What can I say? I’m biased.

Next week (Proposed by Jonathan):

Easter is not a holiday one would associate with cocktails. Although I learned long ago that an internet search will return results for almost any insane search, I was surprised how many results there were for “Easter cocktails”. Even the ever present Pinterest page (I ignored that). David should have St. Germain liqueur, and I should have bought some long ago. That hole in my cabinet will be filled and we will be trying the St. Germain cocktail a mix of liqueur, sparkling water and Prosecco.