Batter. It’s a big word in Tom and Jerry recipes, used unapologetically and/or innocently. Like someone saying “Shut up,” when my parents trained me to avoid the expression, I don’t hear batter so innocently. Who drinks batter?

Still, every person I’ve met from Wisconsin talks enthusiastically about holiday parties accompanied by giant bowls of Tom and Jerry and all the hijinks that ensued. So I had to try. Besides, Eggnog is cliché and Tom and Jerry exotic… in a Midwestern way… if that’s not a contradiction in terms.

The history of the Tom and Jerry also intrigued me. You may think it comes from the cartoon, but no. And it isn’t from “Professor” Jerry Thomas, who wrote a famous bar guide, How to Mix Drinks in 1862. Its history goes all the way back to 1821 when it appeared in Life in London, or The Day and Night Scenes of Jerry Hawthorn Esq. and his Elegant Friend Corinthian Tom. Quite a title.

How Jerry Esquire and Corinthian Tom traveled from London to the American Midwest is mysterious, but the Tom and Jerry is so popular here that you can find Tom and Jerry punch sets in secondhand stores and, in Wisconsin at least, purchase the mix in bottles. I’ve read that you have to have truly frigid conditions to enjoy a Tom and Jerry properly, that it’s a warmer-upper and a lips-loosener for stiff Midwesterners. The stories I’ve heard about Tom and Jerry parties confirm that. One involved a shattered toilet.

I only shared the drink with my family, and I have to report that we were no more raucous than usual, though, if you look closely at the photograph of the drink above, you’ll see my daughter was prematurely ebullient.

Though I worried about this batter stuff, I recognized that creating it was key to the drink and that, without it, you’d have no Tom or Jerry:

The Recipe (for Four):

3 eggs, separated into whites and yolks

Whip the egg whites until just barely (and maybe not quite) stiff. Mix the yolks, the sugar, and the spices in a separate bowl and then fold them into the egg whites with a spatula. This mixture is the Tom and Jerry “batter.”

In each cup or mug, add 2 tablespoons of batter, the alcohol, and then fill the rest with hot milk. My wife mentioned that the steamed milk from an espresso machine might be ideal here, but alas, we don’t own such fancy stuff.

The drink should be served with a dusting of nutmeg and hoisted to celebrate the season. 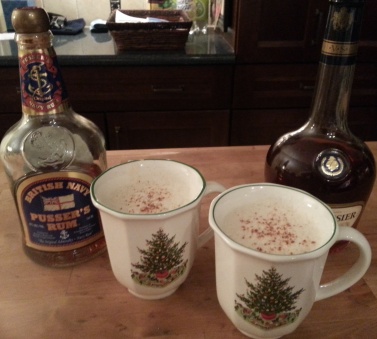 The initial thought that comes to mind when reading “Tom and Jerry” is of a house cat and the rodent who outsmarts him. This cocktail, as has been explained, has nothing to do with that. That said, however, I know a lot more about that eternal chase and frustration than this drink. I had never even heard of it nor had I ever tried to mix a cocktail that required the basic makings of eggnog.

There is something about concocting a cocktail that makes it both fun and rewarding, and this one requires quite a bit of concocting. I actually had an assistant in my youngest son who helped with ingredients, preparation and some slight criticism of my not quite hard peak whipped egg whites (who knew the skills that are required for serious bartending). The challenge to this cocktail was in that making of an eggnog. Whipped egg whites mixed with blended yolks and spices and finally topped with hot milk. And don’t forget the brandy and rum before it’s all done.

The end result was good but lacked something to make it memorable. It probably didn’t help that Charlotte is having record warm weather instead of the hard cold of Wisconsin and Minnesota where the drink is popular. This is a drink that yelled out to be the warmer that drives out bone chilling cold not the follow up to sweating over whipped eggs in front of an open kitchen window in December.

Jonathan’s take: Loved the pictures that accompanied the recipes, but this one just left me ready for a long winter’s nap.

David’s Take: When I was younger and a less metabolically challenged person, I relished the quarts of eggnog that appeared in our refrigerator and enjoyed them even without alcohol, but something must have changed. These thick Christmas drinks seem a lot.

Next week (proposed by Jonathan):

You would think that almost six months in, I would be running out of ideas but it seems the opposite. New Year’s Eve will follow soon after next weekend’s drink so the proposal will be celebration appropriate. In addition, it’s a great time to talk about toasts. I hope someone besides me and David read this and that folks will use it as an excuse to offer their favorite toast as a comment.

4 thoughts on “The Tom and Jerry”