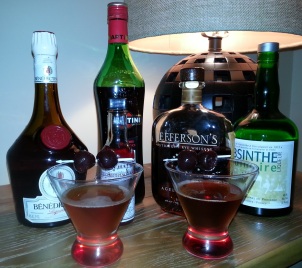 The De La Louisiane cocktail served as the signature drink of the Restaurant de la Louisiane, once described as “the rendezvous of those who appreciate the best in Creole cuisine.” The recipe might have disappeared from cocktailian lore if not for Stanley Clisby Arthur’s Famous New Orleans Drinks and How to Mix ‘Em, published in 1937.

I’m sure that makes me sound quite savvy, but I got it all off the web. For a cocktail that reportedly—and reportedly and reportedly—nearly disappeared from the earth, it sure is everywhere in cyberspace.

Truth is, I chose this cocktail because I have all the ingredients and, knowing how busy weekends are, hoped for something a little easier than usual. Silly me, I didn’t read the recipe carefully enough, as it called for a brandied cherry garnish. One can’t simply buy brandied cherries (one must make them) and, because it’s October, you won’t find many cherries about. My wife and I found some maraschino cherries—not the lurid, Campari colored ones, but really dark ones—and I also made some brandied figs, which I thought might make a good substitute.

This is a potent drink that calls for equal parts of its main ingredients:

a dash of Peychaud Bitters

Our savvy readers may recognize this drink as similar to the Sazarac, sharing as it does New Orleans and two ingredients (rye and absinthe), but the absinthe is much more subtle in the De La Louisiane, a shade instead of a shadow, and the sweetness provided by Benedictine is botanical, not neutral like the simple syrup in a Sazarac. 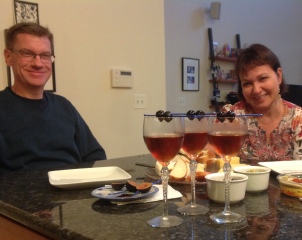 My wife and I were headed to a house warming and invited a couple of friends to share the De Le Louisiane with us as part of what—my guest told me—F. Scott Fitzgerald would call “A Dressing Drink” and my children would call “Pre-gaming.” Whatever you want to call the event, it was fun to have company in our weekly cocktailian adventure.

This theme has come up a number of times already – that many of these cocktails are situation and setting appropriate. Obviously, the aperitif and digestif are intended for before and after dinner respectively but we have also proposed drinks suitable for a summer evening, sitting beachside and in the case of this week’s drink and the Sazerac for quietly sipping at a dark bar or by the fire.

Certainly an enhanced experience based on setting is not exclusive to cocktails. This week marked the 200th anniversary of the birth of Giuseppe Verdi. I heard a story on NPR marking the date and talking about his many great operas. I have never fully appreciated opera, but as they played pieces it was not a stretch to think that sitting in an ornate theatre, or sipping a simple wine in Italy, the music would be transcendent.

The La Louisiane Cocktail offered a broader range of tastes than the Sazerac to which it is so similar. In particular, the interplay between the herbal Benedictine, the sweet vermouth and the rye whiskey was noticeable and welcome. It is odd, considering that licorice is not a favored taste for me, that the background absinthe was also very much forward in this cocktail and really added to it. I took the opportunity this week to make my own brandied cherries to use as a garnish. Not sure they added to the drink, but it was a nice snack at the end.

Jonathan’s take: Cocktails like these make me feel like warming my feet by a fire and singing like Robert Goulet. Excuse me while I do just that.

David’s Take: A truly enjoyable cocktail–perhaps it was the company, but this drink seemed a great start to any evening.

Next week (Proposed by Jonathan):

The time has come in this project to propose a drink of my own creation. We started with the nostalgic Tallulah, someone else’s nostalgia, and my proposal will reach back to a non-alcoholic drink from childhood. The only hint I’ll give is that anyone wishing to try it should make a batch of homemade grenadine this week.

2 thoughts on “The De La Louisiane”